Inflation in the US over the last 100 years.

We are in an inflationary period again, and as a result, the amount of nonsense I hear from politicians or “official” economists is beyond comprehension.

However, two things arise from this fabric of nonsense uttered by the men of Davos, anointed by the Lord and other financial inspectors.

And these are two blatant lies.

To prove that these men are incompetent at best, sold out at worst, and don’t rule out the other, let’s take a look at the history of inflation in the United States over the past hundred years. first that this rise in inflation was perfectly predictable and that it is them who started it voluntarily because any increase in inflation facilitates the weight of the state in the economy and therefore increases its power.

Let’s start by trying to measure this phenomenon by constructing a basic price index of 100 to 1 January 1920, which would consist of half the price of wheat (= food, essential for human survival) and half the price of energy (= economy, necessary for trade between people) and which remains constantly at 50/50. 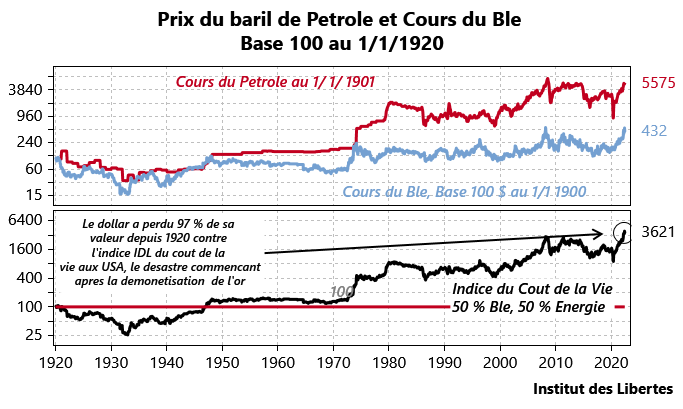 Explanations. From 1920 to 1971, prices remained relatively stable. The disaster begins with Nixon abandoning the gold standard in 1971, which gave central bankers and politicians the freedom to do anything, and they did.

The dollar has since lost 97% of its purchasing power against the IDL Wheat / Energy Index in 52 years. Hard to make worse. Removing central banks and banning budget deficits seem to me to be two measures that must be taken as soon as possible in any democracy, because debt is a disguised way of circumventing people’s tax votes.

Let us now turn to a more serious measure of price growth and look for the cause of the loss of currency value since 1920.

That’s what I’m doing in the second chart. 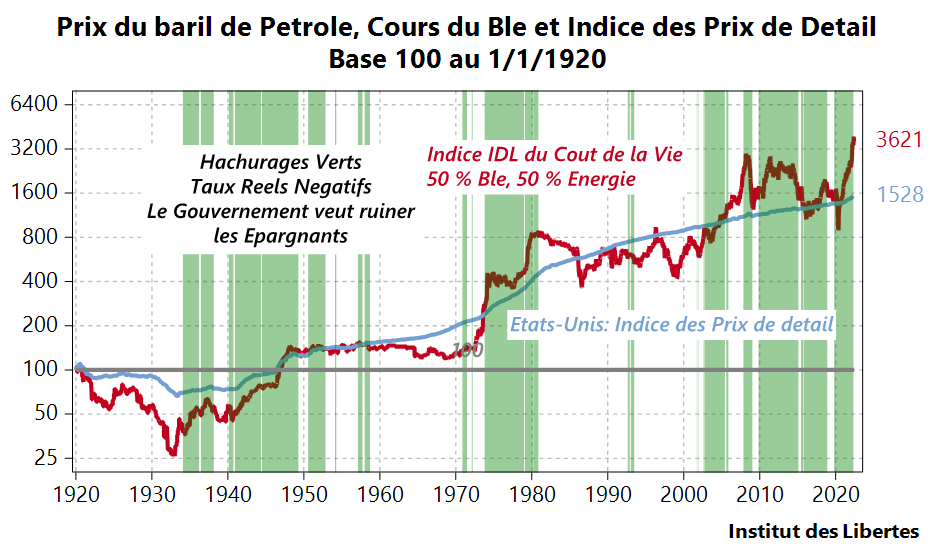 The red line is the IDL price index defined above.

The US retail price index is a blue line where we see that the dollar has not lost 97% of its value, but only 93.5% (yuck, I feel better).

Overall, the IDL index, the composition of which everyone understands, and the official index have grown together, declined together and performed similarly in the long run. But my own index cannot be adjusted by statistical central banks so that inflation, which would be very real, disappears. As Churchill said, I only believe in statistics that I have falsified myself.

Note: when the red line crosses the blue line, it means that the poorest of us is losing the standard of living the most, because most of their spending as a percentage of their income is devoted to food and energy. Inflation is actually a tax for the poor, levied for the benefit of the rich and this is completely unacceptable.

Let’s turn to the crucial question: what triggered these price increases in the past?

Reply to: still weak monetary policy. It is therefore always a voluntary and conscious decision to shit the currency.

Explanation: We have had three big inflationary waves in the last century.

Because in all three cases, we had negative real rates at the beginning of the phenomenon , that is, political or banking authorities did not want to pay the market price for borrowing in order to spend more, in hopes of re-election. Simply put, they manipulated the price of time (interest rates) so that they could borrow more and spend more, Nowby taxing small savers in favor of fellow capitalism, which will be able to reward them when they all retire.

Recall Rueff’s definition of inflation : Subsidizing worthless expenses with money that does not exist.

Subsidizing government spending means not paying the real price of borrowing, which always leads first to a sharp increase in the money supply and then to an acceleration in price growth, which affects the poorest. That’s what he has stillled to inflation and which corresponds very accurately to all green hatched periods

The result will be, as always, when it comes to unfair wars and foolish spending, a series of military defeats and another profound decline in the living standards of the poorest in the United States.

It can’t be otherwise.

Finally, we come to the last question: how can an IDL reader protect himself from this impoverishment that threatens us when our politicians follow the same policy? I have often talked about Chinese bonds, about 10 securities that have nothing to do with the French state or the American state, and about gold.

I also explained how to build a portfolio where 50% of the positions would be based on anti-fragile stocks (gold and Chinese bonds).

Let me make a small remark about another investment that the reader might consider more speculative than part of a stable portfolio, I want to talk about other precious metal, silver metal, which seems to be very undervalued.

Here is the chart. 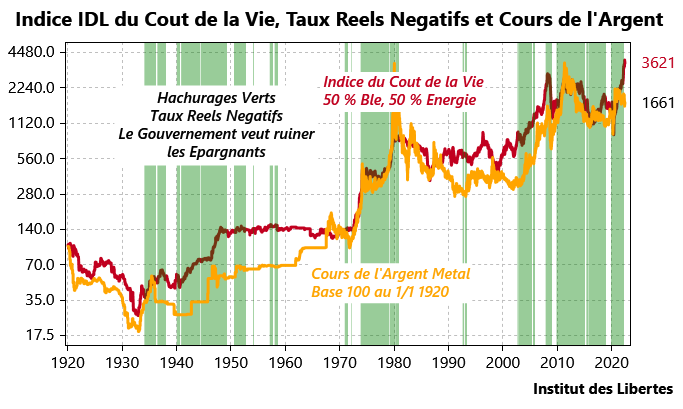 It seems that if I make a small regression between the price of gold and the IDL cost of living index in the US, the price of silver metal should rise by about 70% to catch up with the theoretical level where it should be (R2 = 0.83). I have never encountered a regression that would indicate a 70% underestimation that I did not like, but the results were not always in line with my expectations, so I’m a little suspicious. When something is too obvious, I tend to be suspicious.

But investing in silver metal, while a bit obvious, still seems smarter to me than positions in French or German bonds.